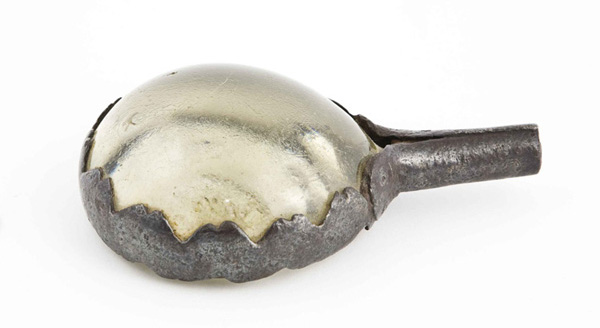 Jennifer Tetlow:  The Museum as Muse

Jennifer has spent a year exploring the Harrison Collection, now housed in the museum, as the inspiration for new work.  Having previously visited her workshop during an open studios event, I am familiar with her soft, lyrical carving.  Jennifer’s sculpture is honed from close observation of her rural surroundings and the creatures within it.  The stone she usually selects is local Yorkshire sandstone for its ability to withstand the elements because most of her work is designed to be displayed outdoors.

I was intrigued, then, to see that this exhibition consists of sculptures carved from a variety of different types of stone, displaying tactility of surface and reflecting the light in different ways.  The white walls and ceiling of the gallery, combined with the whites and neutral shades of the stone punctuated by an occasional black piece creates a satisfyingly unified exhibition.

Only one major sculpture, Glow Worm, (male), is carved from the local Yorkshire sandstone that Jennifer usually employs; it is a satisfying slab of a piece and contrasts beautifully with its more curvaceous female counterpart, Glow Worm, (female), placed diagonally across the gallery from it and carved in a beautiful white Bath stone.  The quality of the Bath stone pieces set on the white painted plinths were rather bleached out by the harsh lighting, which is a shame because this made it difficult to see the more subtle aspects of the carving.  (On my second visit, this had been rectified to a certain extent by turning off the overhead flood lighting).  “Vessel” is a piece, carved in Bath stone and inspired by a whale’s blow hole, satisfyingly solid, with beautiful curves and subtle folds carved into it, that would have benefited from more sensitive lighting.  I did like the contrast between the quality of the stone and the painted plinths and it set me to wondering what the pieces may look like if they were placed on natural wood or other types of supports; it may be something that Jennifer will consider as she develops this line of enquiry in her work.

However, I will not dwell on this; the exhibition is testament to Jennifer’s engagement with the Harrison Collection.  The small black carved “Magpie” smoothed and curved yet still capturing the essence of the bird in its pose is a piece that forms a link between Jennifer’s usual way of working and the new, vibrant and tactile pieces in this exhibition.  There is a variety of scale; down the wall on the left a series of shelves displays small maquettes to which I was drawn time and again, their carving intriguing, satisfying.  Jennifer talked about the carving of the spoons of various sizes being comfortable and warm in her hand and how she relished the connection between these responses to the spoons she studied in the Harrison Collection, the ones she has carved and the silver spoon found in the thatch of the Manor House on site in the museum.  In fact, she talked with great passion about different connections that unfolded as her study of the collection developed, things such as the beautiful and rare Alabaster stone she decided to use because it catches the light becoming a metaphorical reaction to bringing the objects within the collection from the dark of storage boxes into the light.  She learned with delight that Alabaster is traditionally finished with whale oil, creating yet another connection with the scrimshaw pieces in the collection.

Along the right hand wall there is a series of three boxes containing small pieces that are really anthropomorphic reminding me of ancient works made by our early ancestors; tiny as they are, they have a really strong presence.  A group of tiles depicting simple silhouettes of domestic items create interesting still lifes and illustrate Jennifer’s eye for composition and tone.

One of the small pieces that I found very appealing and satisfying features in the publicity photographs, it is a smooth polished piece of alabaster held within a coronet of Bath stone inspired by a pipe lighter in the collection.  The contrast between the two types of stone and the way they have been finished is utterly beautiful.

The large butterfly piece with its accompanying inscribed tablet, both placed on the end wall of the gallery lacks the animation of the other pieces in the show and tends to dominate the space; I think they would have been better placed on one of the side walls.

All artists bring to their work their eclectic life experiences; the touch of their hand is what makes a piece of work their own.  I was fascinated when Jennifer talked about “the ease of the curve”, meaning how her own body naturally makes a curve in one direction much more easily than in another.  Jennifer discussed during her talk how collecting is a natural instinct in all of us, (again, the magpie surfaced in her consciousness), the Noah’s ark in the Harrison Collection held resonances with her own childhood and memories of fables and moralistic tales; we all crave objects of desire.

Jennifer has responded to the pieces within the Harrison collection with the eye and touch of a real craftsman; she admires and relates to the craftsmanship of the individual items, enjoying the connection of hands that make and hands that use.  Things such as jelly moulds, pipes, sticks, traps and vessels of all kinds provided her with a rich source of enquiry.  Her sculptures have provided us with an incredibly thoughtful link between old objects, craftsmanship and contemporary art practice.

Latest From The Blog